Truck Falls Through The Asphalt And Needs a Towing Company Services 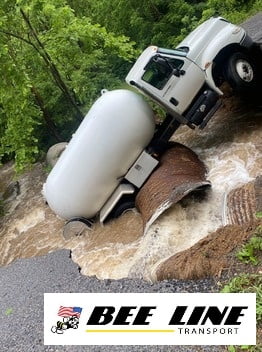 Even when all roads are flooded and the rain keeps pouring down, Bee Line’s towing company team comes to the rescue of vehicles in trouble. We made quite a remarkable recovery last month involving flooded and caved-in roads like you’ve seen in action and doomsday movies. What happened? The roads in Blue Ridge Virginia were completely flooded due to heavy rain and a propane truck fell through the asphalt while driving. Yep, the road just caved in and the truck was resting on a culvert pipe beneath the ground. What an image! Our towing company team knew this would be a challenging and quite a dangerous towing job and so the team went to work straight away bringing along one of our 65 ton sliding rotators. Turned out, even getting to the scene of the event was difficult as Route 460 to Blue Ridge was flooded and the team had to look for alternative roads only to find more flooding and obstacles. The road where the truck fell through the ground was a one-way road and even worse, the road was still caving. At the same time, the river bank was flooding and gushing with water. This would be a complex rescue mission and the local fire department Swift Water Rescue Team made their way to the scene as well. A quick scene survey led to bringing in another 65 ton sliding rotators and an emergency response truck before proceeding with the recovery of the propane truck.

Initially, the Swift Water Rescue Team would attach the rigging to the truck in the gushing water but in the end, two of our towing company team members played the heroes of the day. They were hoisted down the creek to get to the truck and put rigs on four points to be able for the rotators to lift it up into the air. Another scene survey was done before continuing the recovery plan. Safety before everything! Carefully, our superhero towing team worked together with the fire department to lift the truck out of the water in the creek, out of the crack in the road and up into the air. Then, the team could safely place the truck back on the ground. It was taken away to our storage lot where it could rest, take a bath and undergo some health check-ups. Wow, is all we can say! Our team did a fantastic towing job with the help of the fire department’s Swift Water Rescue Team. Thanks, guys! 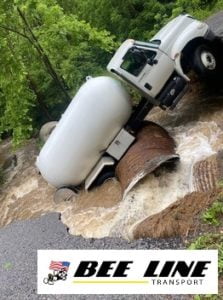 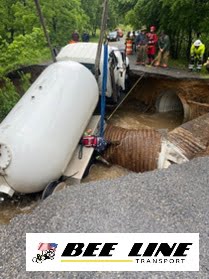 Truck falls through the asphalt and needs Towing Company 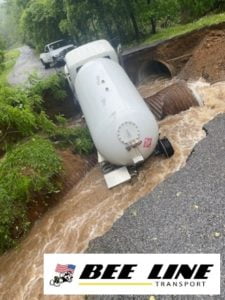 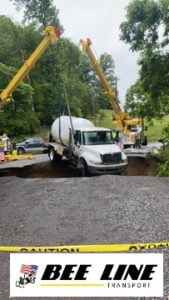 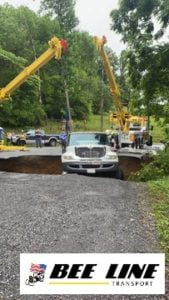 The towing company team had to wait for the Swift Water Rescue Team to arrive (approximately 2 1/2 hours). In the meantime, the towing company team continued discussing the plans and got the equipment ready for the recovery. Once the team arrived, they did a scene survey and decided they did not feel safe to attach the rigging equipment. They said they could assist the towing company team hoisting a man down to the truck and getting through the process. The towing company team operator put on a safety vest and they worked together to strap him up to the crane to be hoisted down into the water.  The Swift Water Rescue Chief had a team member walk up the creek to safely watch from a different angle and to keep the towing company team informed if there were any hazards coming down towards the teams’ operator while he was in the water. Two of the team members were placed down the creek in position ready to go in the water if an emergency extraction was needed. The towing company team used the rotator (49) to hoist the rigger into the air and down to the truck in order to hook a line to the rear of the propane truck. Operators rigged four points on the truck to lift it safely. Performing the rigging on the truck was exceedingly difficult due to the hazardous waters, angle, and intensity of the situation. Once the rigger was able to complete the task, the towing company team lifted him up the front of the truck and back on the ground to safety. The towing company team gathered with all head safety officials on scene to do another scene survey. The towing company supervisor informed them the exact plan of the recovery before we began the lift. All officials were on board with the recovery plan and said to go ahead and start the process. All surrounding people were cleared from the scene and made to stand back at a distance. The fire department brought in a fire line for extra safety if something were to go wrong. Both rotator operators had another safety meeting for a moment to ensure they were clear on the task at hand and they were on the same page for how to lift the truck.  Operators began to lift the rear of the truck out of the water to level the truck flat while holding the front in place. Once level, they waited for the load to settle. They began to lift the truck straight up off the covert pipe into the air. The rear left tire was wedged into the covert. They lifted that side higher to remove it from the pipe and release the tension. Operators lifted the truck and rotated it between the towing company teams two rotators. Due to the low power lines above, they had to carefully navigate the booms to turn the truck around and face the direction it needed to be towed. The truck was safely placed on the ground and removed all rigging equipment from the casualty.  Operators put all the rigging equipment away and began the process of restoring the towing company’s rotators back into their original form. Operators positioned the rotator (48) to tow the truck from the scene. Operators pulled the drive shaft and ran air to the truck for the tow. The towing company team had to wait for all the apparatus and responders to clear the roadway to leave the scene. Once at the facility, the truck was placed in the secure storage lot and operators cleaned and conditioned all truck and equipment back to its original form.