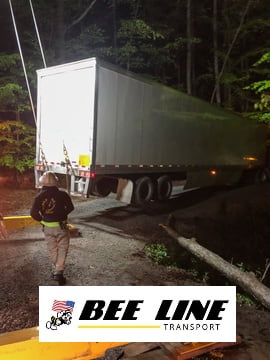 Late Friday night on the 8th of May 2020, Bee Line Transport and Heavy Towing received a call from U.S. Express about a cab and a trailer that had fallen into a creek on the side of the road in Monroe, Virginia near highway 130. What happened? Well, the driver was simply following his GPS when he ended up on a long, curvy dirt road. As the driver tried to make a turn, the trailer slid down an embankment into a creek and the left rear was left suspended in the air. Hmm, quite a nasty situation. This truck and driver were in need of immediate help! Luckily, the towing team of Bee Line Transport came to the rescue ASAP positioning their 65-ton sliding rotator and setting up the special LED Lumen Light Power to provide a safe working environment on this late, dark night. Next, the tires of the trailer needed to be tied to prevent twisting and turning. The trailer was then lifted off the side with the help of a rotator boom and put back on the road behind the cab. Well done, guys at Bee Line Transport and Heavy Towing! The towing rescue team had a look at the GPS and noticed the road ahead was the long mountain road to Buena Vista with lots of bad turns and they decided to escort the truck to the end of this long, windy dirt road. Just when you think you’ve had it all, the next challenge popped up: the truck was out of fuel… Luckily the Bee Line Transport team was prepared for everything. They dispatched the road service truck to fill up both tanks and the filter reservoir of the trailer truck. The truck was then on its way again but it almost slid down an embankment again while passing another dangerous curve. Luckily the driver stopped just in time and with the help of the expert towing team, the made it across the mountain road safe and sound, on his way to its destination. Phew! Where would cab and trailers be without such a great towing team to watch their back?!

Bee Line Transport and Heavy Towing Team came to the rescue of a cab and trailer that slid off the road into a creek last Friday night of the 8th of May in Monroe, Virginia. The incident happened near Highway 130 while the driver was following his GPS and ended up on a dirt road across the mountains to Buena Vista. The towing team at Bee Line Transport and Heavy Towing used their 65-ton sliding rotator to pull the trailer back onto the road behind the cab. The tires of the trailer truck were chalked for safety and a LED Lumen Light was set up to provide good vision on this late Friday night. Once back on the road and ready to drive, the truck was out of fuel so the towing team dispatched the road service truck to fill up the tank and reservoir. The rescue team at Bee Line Transport and Heavy Towing followed the cab and trailer all the way across the mountain road to Buena Vista to make sure it wouldn’t slide off the road again as they knew there would be more dangerous turns ahead. A job ain’t over till it’s over!