Lynchburg City Police Department requested the aid of a tow service at 8:50PM on October 26, 2020. A tractor trailer had been trying to make a sharp left turn off of Campbell Avenue onto Carroll Avenue. Unfortunately, the trailer did not clear the turn and had run up onto the bridge wall leaving the loaded trailer leaning precariously off of the bridge wall.

With the trailer in danger of tipping over at any time, the Bee Line team jumped straight into action. Careful planning is key when it comes to heavy duty recoveries. Having received all the information from the Lynchburg PD, the Bee Line team was able to assemble all the equipment and machinery they would need for the job prior to arriving on scene. They arrived at the corner of Campbell Avenue and Carroll Avenue with a rotator, a service truck, a light duty tow truck, a crash truck, a rollback truck, as well as a tandem loaded with a forklift!

Safety is always the number one priority. The first thing the towing service team did when they arrived was to set up an LED light tower to light up the scene and allow them to safely assess and work on the tractor trailer. The front axle of the trailer was extremely twisted, and it’s rear axle was hanging one foot off the ground. With the trailer leaning towards the left, the team set to work to stabilize it. Once the trailer was stabilized, the Bee Line team carefully began the delicate task of lifting the loaded trailer off the bridge. There was no room for error. One small misstep could spell disaster!

Once they had the trailer back on the road, the team set to work removing the damaged axle as the trailer would not be able to be towed in its current condition. With the axle removed, the trailer was placed on tandem dollies to facilitate the tow.

This was not an easy job and the Bee Line team’s professional training and attention to detail made all the difference. A special thank you to the Lynchburg Police Department for helping us keep the area safe and controlling traffic during the recovery. 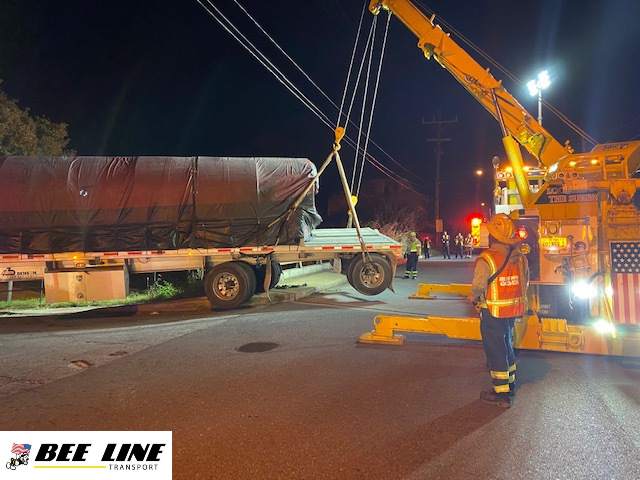 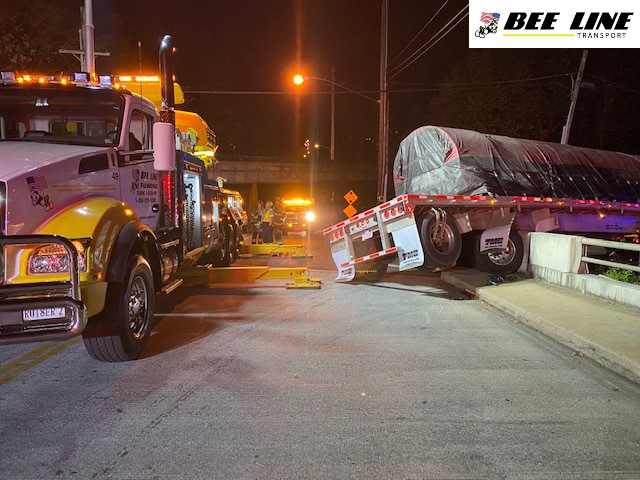 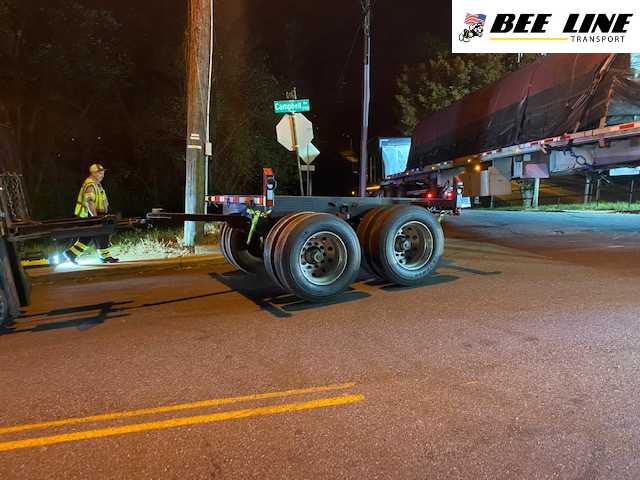 Dispatch received a call requesting a tow service at 8:50PM on October 26, 2020. A tow service fleet consisting of a rotator, a service truck, a light duty wrecker, a crash truck, and a rollback truck was dispatched to the scene of the accident. The tow service team arrived at the corner of Campbell Avenue and Carroll Avenue.

The tow service team did a final assessment of the scene prior to making their way back to the Bee Line lot.