Bogged Down Truck Will Need a Tow

Need a tow? A loaded tractor trailer definitely did when it’s driver reached out to Bee Line’s dispatch team on September 22nd, 2020. As many of us tend to do, the driver had relied on his GPS to get him to his final destination. Unfortunately, the GPS didn’t take into account the fact that the vehicle it was guiding was a massive tractor trailer loaded with 38,000lbs of cargo!

The truck driver was forced to make a sharp left turn at a Y intersection. Unfortunately, there was nothing he could have done to prevent the rear of his trailer from dropping into a roadside pond during the extremely sharp turn. Bee Line’s trained dispatch team understood that this would be a complicated tow. In order to ensure that they supplied their teams with the correct equipment for the job, they requested pictures of the truck from the driver.

With those pictures in hand, the dispatch team knew exactly what to do! As you can imagine, this was not your run-of-the-mill towing job. The Bee Line Towing service team needed to first carve out an access to the back of the truck using a weedwacker. They then shovelled mud out from underneath the truck. In order to access the rigging, they had to dig the mud out with their hands (you don’t get into this business if you don’t like getting dirty). This is when they met a new member of their tow team, a copperhead snake who had found himself wedged underneath the truck.

The copperhead was slightly worse for wear after his run in with the loaded tractor trailer so it was relatively easy to move him. Once they dealt with the snake, the towing team could once again focus on the trailer. Using their rotator, they swung the truck back onto the road and then guided the driver back to the main road.

This was not an easy job by any means. It took some gardening skills, shovelling skills, and most importantly years of experience in heavy duty towing. Great job team! 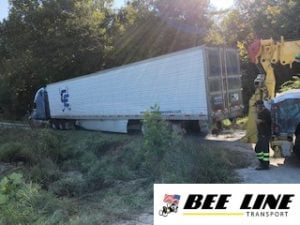 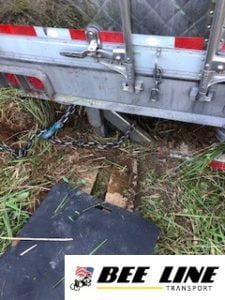 Details of Bogged Down Truck Will Need a Tow

The Bee Line dispatch center received a phone call from a client who definitely did need a tow. The heavy towing team understood this would be a complicated task so they had the driver send them pictures of his loaded truck. Once they saw the pictures, the towing team drove out to the driver (who did need a tow) with the right equipment.